Legacies of the War.


There are some interesting legacies to the War that relate to fishing and boat building here in Okinawa.  Before I arrived Shimojo san had roughed out a bailer for our boat.  He used Okinawan pine and we are letting it dry before doing the final carving. 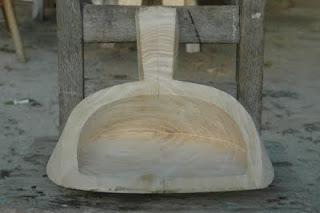 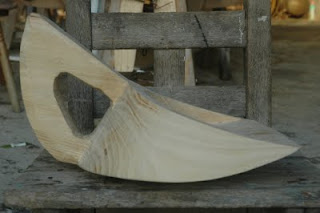 He told me though that the craft of making these bailers all but disappeared because after the War fishermen gathered American helmets and used those instead.

By far one of the most interesting uses of salvaged materials is the "tankobune" (tank boat) which were made from US Air Force aluminum drop fuel tanks, which must have rained down on Okinawa in the thousands.  In addition to being used as water tanks (islanders collect rainwater from their roofs), fishermen were soon cutting them in half and making boats out of them.  Here's one in the local museum. 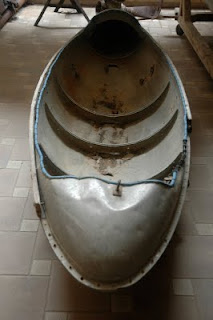 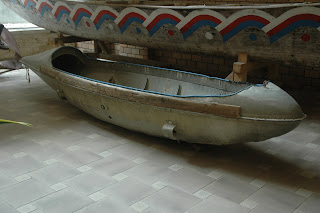 They are about eleven feet long and one man I met told me that the island's airport had a squadron of Republic P-47 Thunderbolts after the War, so he thinks most of Iejima's tankobune were from P-47s.  Tankobune were, of course, not for the high seas, and were used here mainly fishing for octopus, which the fisherman caught with a sight glass and spears, working close to shore.

Shimojo san told me that in his machine shop he was the first person to put an engine in a tankobune.  He installed small, one cylinder gasoline engines in them.  I asked how long these boats were used here and was told that they were common up until about twenty or thirty years ago, but tonight a visitor to my guest house insisted that he knew someone locally who used a tankobune until just a year or so ago.  I couldn't help but ask if I could meet this person and see his boat, and tonight I got my chance. 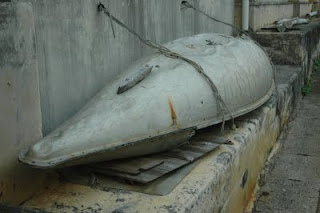 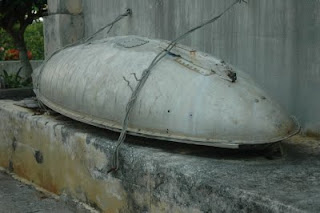 Oshiro san is ninety-four years old and has had his tankobune for about sixty years.  He was a tobacco farmer and a part-time fisherman, going after octopus as well as other fish.  He and his wife were saying how hard life was after the War, "lots of kids and no money" and his wife added, "When you have no work its good for making babies."  I've noticed that post-War families here were big ("baby boom" is a phrase that everyone recognizes).  But the most amazing thing was learning that Oshiro san last took his tankobune out just two years ago, when he was ninety-two!  You have to come to rural Japan, and see how hard the elderly still work in the fields and in the sea, to believe it.  And you can be a militant wooden boat fanatic but you have to admit that tankobune are very kawaii, or cute. 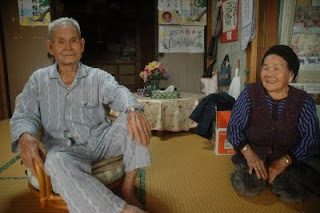 A man after my own heart he also had an unpanki, which means "transport machine" and is the precursor to the truck here in rural Japan. 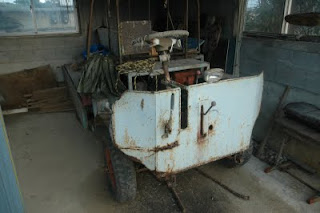 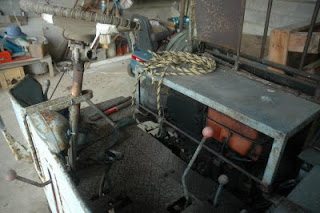 Posted by Douglas Brooks at 2:35 PM