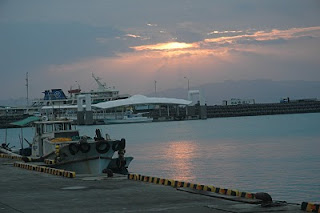 A couple of weeks ago an older man stopped by the shop.  He introduced himself as Kaji san, a pseudonym that means Mr. Rudder, and told me he was living aboard his home-built catamaran in the harbor.  I have seen him a few times in the morning when I am down by the ferry port before work, and he has always invited me over to look at his boat.  His invitations are so earnest, but since we work seven days a week its hard to do anything extracurricular.

This morning I saw him again and realized I had enough time for a quick look at his boat.  We walked over and he explained that his boat has been out of the water for some time while he is working on it.  Sure enough there it was in the lot, a big catamaran designed by James Wharram (http://wharram.com/index.php).  He told me he built her out of 9 mm marine plywood.  This is just 3/8" which sounds pretty light to me for a boat this size. 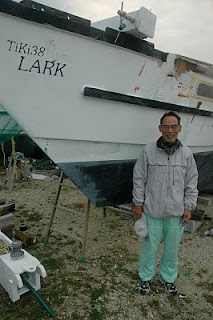 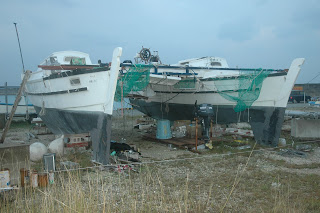 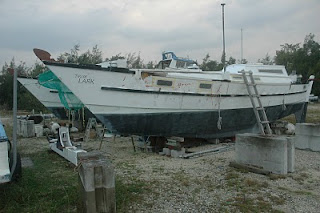 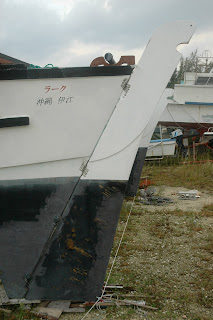 He named his boat LARK and he appreciated the meaning of the word.  He also has it spelled there in katakana, one of the Japanese phonetic alphabets.  Since there is no L sound in Japanese, a strict reading is "raku" which in Japanese means "ease, comfort, to have fun."  Its a bilingual synonym.  He has twin 15 hp outboards that sit in a pair of interesting engine wells.  You can see them in the background right next to the hulls. 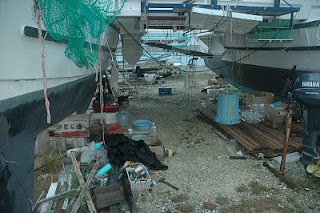 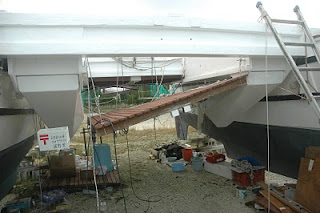 Note his mailbox (with the red T).  The service provided by the Japanese post office is mind-boggling, so it didn't surprise me that he could establish his own delivery right to his boat.  He's been here a few years, slowly working on her.  Those are the engine wells viewed from the bows.  I assume they swing up. 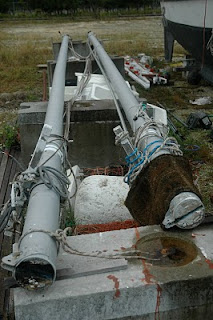 His masts are straight aluminum pipe, no taper.

What really amazed me, and if he hadn't pointed it out I would have never noticed, is that he took off his rudder hardware and replaced the gudgeons and pintles with lashings!  He said that this was a suggestion from a friend in Kagoshima, a place he stayed in transit to here from Osaka, where he built the boat.  He and his friend were inspired by the sailors of Polynesia in making this change.  The rudders swung kind of stiffly on the lashings, but he assured me that he had complete confidence in this arrangement.  Of course if they showed signs of wear they'd be simple and inexpensive to replace.  Four lashings hold each rudder.  What an idea! 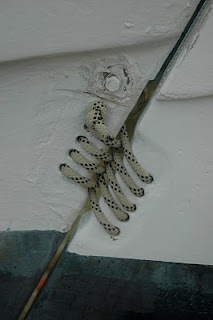 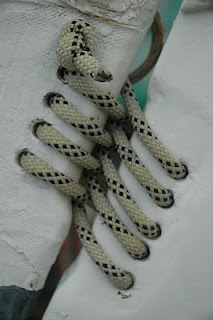 Posted by Douglas Brooks at 2:45 AM