This posting is my longest yet, but I hope you will bear with me.
One of the mysteries of the last two weeks has been why we've worked from such huge pieces of wood, and secondly why we have taken such incremental amounts off them in trimming pieces to fit.  It just has seemed like an ungodly amount of work to shape and trim the three pieces that compose the soko, or bottom of our boat.
Of course my primary role here is as a researcher, and in that guise it is my job to record how my teacher designs and builds his boats.  I have had a lot of questions lately about why Shimojo san does some of the things he does, but I have to be careful because it's certainly NOT my job to tell him how to build a boat (given that he is eighty years old, and has built more than a hundred boats over the last sixty years, this would be beyond presumptuous).  But when his methods seem strange then I feel I need to carefully prod him to find out why he is doing things the way he is, even when the inference is clear that I think there is a better way. 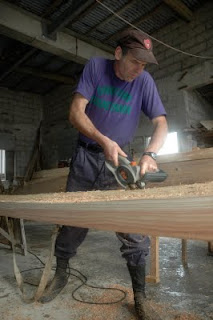 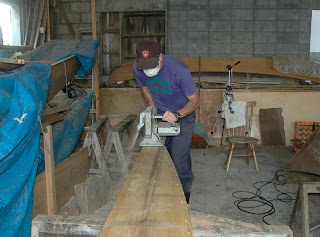 Here I am roughing out our final piece of wood for the bottom, using an electric chainsaw.  The other picture shows me taking an inch off the straight edge with the beam saw.  Although it took half an hour to chainsaw the length of this eighteen foot plank, I was very grateful that we at least got rid of this much material at once.  That is because we've been using the electric plane again and again to remove vast amounts of material.  Shimojo san has two bandsaws, and I asked him if we could use one of them to saw this material.  "No," he said, "that's bad."  Lot's of time the answer to why in Japan has been, "Because that's how it's done."  It was one of those moments where I didn't feel it was appropriate to press him for a reason, so half an hour later I finally had the thing chopped through. 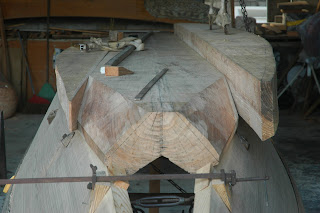 Here is a shot of the bottom of our boat, with the center and one side piece at their basic final dimensions, and the last side piece dropped into place for the first time.  Remember, I had just cut almost a two inch thick slab off the curved side of that thing, and another inch off the straight edge, and its still huge compared to the rest of the bottom.
So that was the next big question: why do we painstakingly plane down these timbers to a final fit?  Twenty times we moved the center timber off the boat and to the horses for planing, and back.  Twenty times we moved the first side timber for fitting.  We are two days into it and ready for our ninth pass on the final timber as I write this.  When we are done it will have been almost two weeks that we have been working on just these three pieces.
One thought I had today was that Shimojo san told me that a sabani, well taken care of, lasted the lifetime of its owner, so applying a cost benefit analysis, taking an extra week or two to build is really nothing compared to, let's say, a sixty year life of the product (one boat at the sabani race I watched was fifty years old).
The other thing that prevents me from rushing right in and asking Shimojo pointed questions about his methods is my second role as an apprentice.  In Japan the apprentice system is well within the collective cultural memory.  And a deshi (apprentice) lives and works under very strict cultural norms.  I've had some very interesting moments with my other teachers in Japan when I tried to suggest something, and I frankly regret, in most cases, having ever raised any of my bright ideas.  It is simply NOT the apprentice's place to question or make suggestions to the master, and the master is certainly under no obligation to explain himself.  A westerner's first take on this would probably be resentment, followed by rebellion.  Perhaps if you have studied martial arts you understand that demanding humility and obedience is actually an integral part of the learning process. 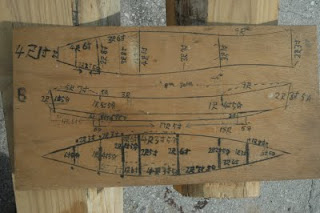 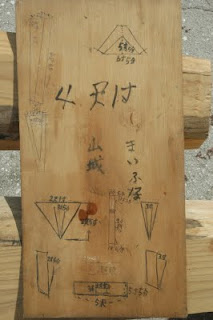 Shimojo san did not himself apprentice with a boat builder.  He taught himself, and I realize that he treats me like more of an equal than any of my other teachers.  He's encouraged me to copy all of his drawings and patterns (we are lucky to have them; he told me that he always worked from memory alone until a few years ago, when he realized he was forgetting things and made drawings of five types of his sabani), and he says he hopes I will go back to America and build a sabani.
An answer:
Today I was taken by surprise when we were lying under the boat together marking the timber (yet again), when Shimojo san turned to me and said, "You're smart.  You are wondering why we are taking so long to do this."  I said that I was wondering, and I asked him why he didn't measure the timbers and cut them nearly to shape right from the start.  He said, "I used to do this whole bottom in three or four days.  I would maybe make three passes with the chainsaw then a final fit with the plane.  But since my accident I can't use a chainsaw so the only tool I can use is the power plane." He added, "I couldn't go to Miyazaki to supervise the milling of the wood and it came here too big."   About the bandsaw he said, "I can't do that one-handed, that's dangerous."  So what it boils down to is that he basically has to do all his work one-handed, which means he only has the power plane (or has me use the electric chainsaw, but he is not ready to trust me to make finish cuts with it).  As for the time factor, I think that to Shimojo san its just not a concern.  He's eighty years old and likes building boats (we work seven days a week) and doesn't have to worry about when they get finished.
Ironically this same morning his neighbor and I were chatting before work and he said, "Shimojo san will always build boats.  That's all he wants to do.  There is no stopping him."
Posted by Douglas Brooks at 2:57 PM